Home ● Antonio Canova ● Biography
"AT MS. TAMBRONI’S HOUSE IT HAPPENED TO HAVE FREQUENT DISCUSSIONS WITH CANOVA [...] NO MATTER HOW BRILLIANT WE WERE, CANOVA DID NOT LISTEN TO US AT ALL: AESTHETIC DISCUSSIONS DIDN’T MAKE HIM INTERESTED, HE ONLY UNDERSTOOD DISCOURSES "IN IMAGES", THE ONLY ONES THAT SOLICITED HIS IMAGINATION."
Sthendal - Letters from Rome

Antonio Canova was born 1 November 1757 in Possagno, he approached the world of sculpture from an early age thanks to his grandfather Pasino, stonemason, who arranged for him to enter the workshop of Giuseppe Bernardi, called Torretti, first in Pagnano d’Asolo and then in Venice. Here the young Artist studied drawing at the Accademia del Nudo and opened his own studio, where he received the first important commissions. Eurydice (1773-1775), Orpheus (1775-1776) and Daedalus and Icarus (1779) – all in Venice, Museo Correr – were among his very first works, realized for Senator Giovanni Falier.
In 1779 he made his first journey to Rome, where he came in contact with neoclassical art and with the ideas of Enlightenment theorized by Anton Raphael Mengs and Johann Joachim Winckelmann. In the same year, he also visited the archaeological sites of Herculaneum and Pompeii and he remained deeply affected by the ancient Roman and Greek art.

In 1781 Canova settled permanently to Rome and opened his workshop. It was situated near the Tiber River, means of transport of the marble blocks coming from Carrara. In Rome the Artist created some of his most famous sculptural masterpieces: Cupid and Psyche (1793), The Graces (1816), Funeral Monument to Clement XIII (1792), Fainted Magdalen (1822) and many more.
In 1798, when the French troops arrived in Rome, Canova returned to Possagno where he devoted himself to painting: many of the oil paintings of this period became preparatory studies for later sculptural works. On a visit to Vienna later that year, he was persuaded by Duke Albert of Saxony to design one of his most poignant tomb monuments, Funerary Monument to Maria Christina of Austria (Vienna, Augustinerkirche, 1805). During this time, he also travelled to Bohemia and Germany.

Two years later the Sculptor went back to Rome with his half-brother, Giovanni Battista Sartori, who came to live with him and served as his secretary.
When Napoleon was nominated First Consul of France, Antonio Canova portrayed many members of the Bonaparte family. The sculpture of the emperor’s favourite sister, Pauline Borghese Bonaparte, represented as Venus Victrix (1804-1808) is still one of his best works.
Of fundamental importance was the diplomatic assignment that Pope Pius VII entrusted to Canova in 1815: he was sent to Paris to bring back the many art treasures stolen during Napoleon’s ascendancy. His diplomacy furthered the return of many Italian masterpieces.
The last masterpiece Canova designed was the new parish church for his native town, Possagno. The construction of the Tempio began in 1819, but the artist never saw the work completed as he died three years later, on 13th October 1822 in Venice.
During his life, Antonio Canova was an artist and a patron, he knew the most important representatives of art and politics of the time, he could speak English and French. His art was praised all over Europe and today his sculptures are preserved in the major museums of the world. Despite his fame, he never forgot his origins and his native town, Possagno, where there is the Canovian Gypsotheca, a unique treasure.

Antonio Canova was born on 1st November 1757 in the village of Possagno near Treviso in the North of Italy. His father Pietro, a stonemason, died in 1761, when Canova had not yet turned four. His mother, Angela Zardo, remarried with Francesco Sartori and entrusted Antonio to the care of his grandfather Pasino Canova (1711-1794), also a stonecutter and a sculptor.
According to a Romantic legend, Antonio Canova had to work at a villa in Asolo, due to some economic problems of his grandfather. Here he showed his sculptural ability for the first time: he realised the sculpture of a lion with butter.
Pasino Canova, with the support of Senator Giovanni Falier, noticed the precocious talent of the young boy and sent him to work at the workshop of the sculptor Giuseppe Bernardi, called Torretti (1694-1773), in the nearby Pagnano d’Asolo. In 1768, when Torretti went to work in Venice, the young Canova joined him. 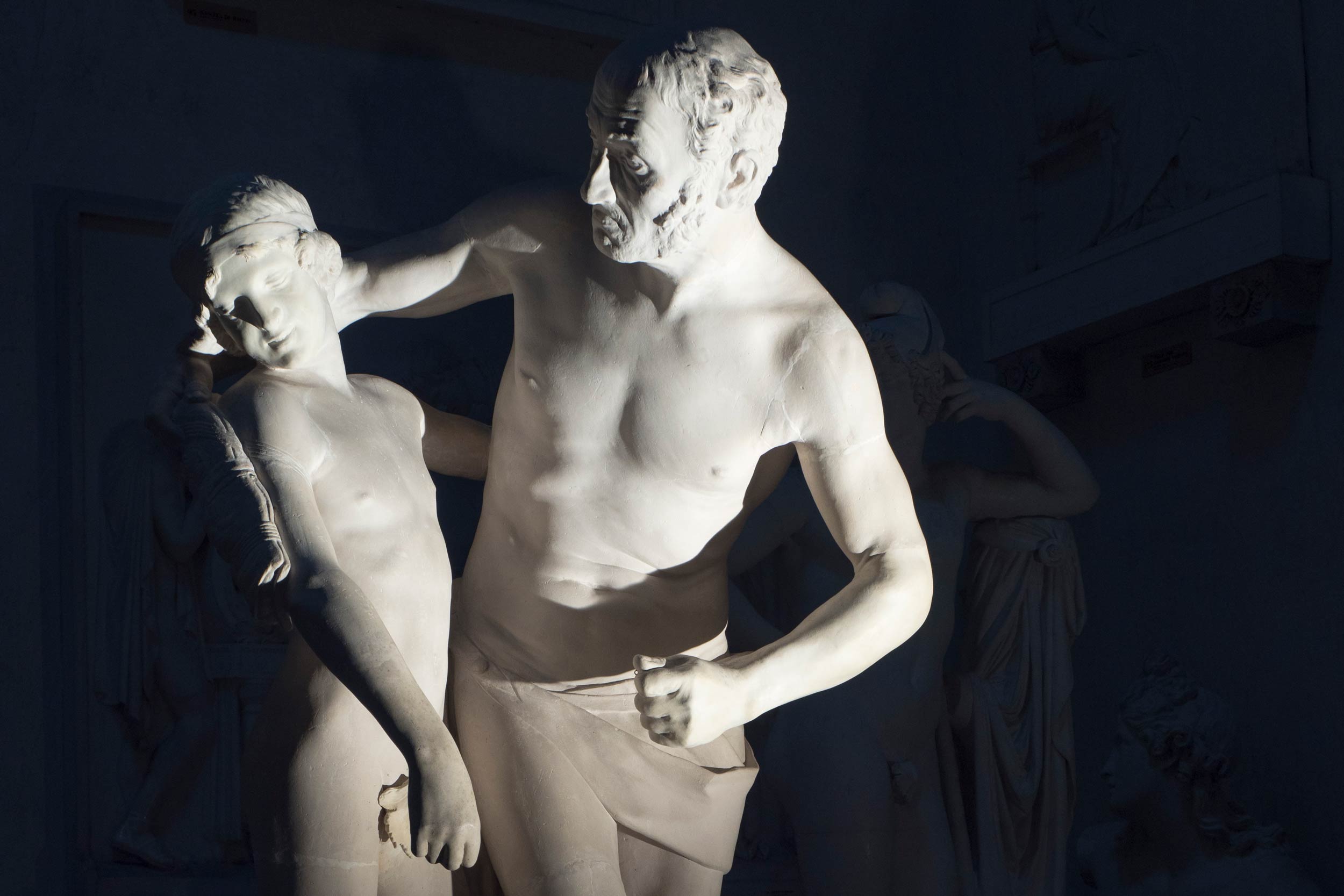 In Venice the young Canova had the opportunity to study drawing from life at the Accademia del Nudo and antique sculpture from the collection of casts in the Palazzo Farsetti.
Since his fame in Venice grew quickly, the Artist decided to open his first studio in 1775 in the cloister of Santo Stefano. Here he created his first works: the two Canestri di fiori e frutta (1772) and the sculptural group of Orpheus and Eurydice (1775-1776) – Venice, Museo Correr, all commissioned by Senator Giovanni Falier.
Orpheus and Eurydice won public acclaim at the 1776 Venetian Fiera della Sensa exhibition. In fact, the following year, Canova was commissioned a sculpture with the mythological figures of Daedalus and Icarus, which was exhibited at the Fiera della Sensa exhibition in 1779. Its impressive contrast of emotions and physical types won him funds for a trip to Rome, where he would settle permanently. 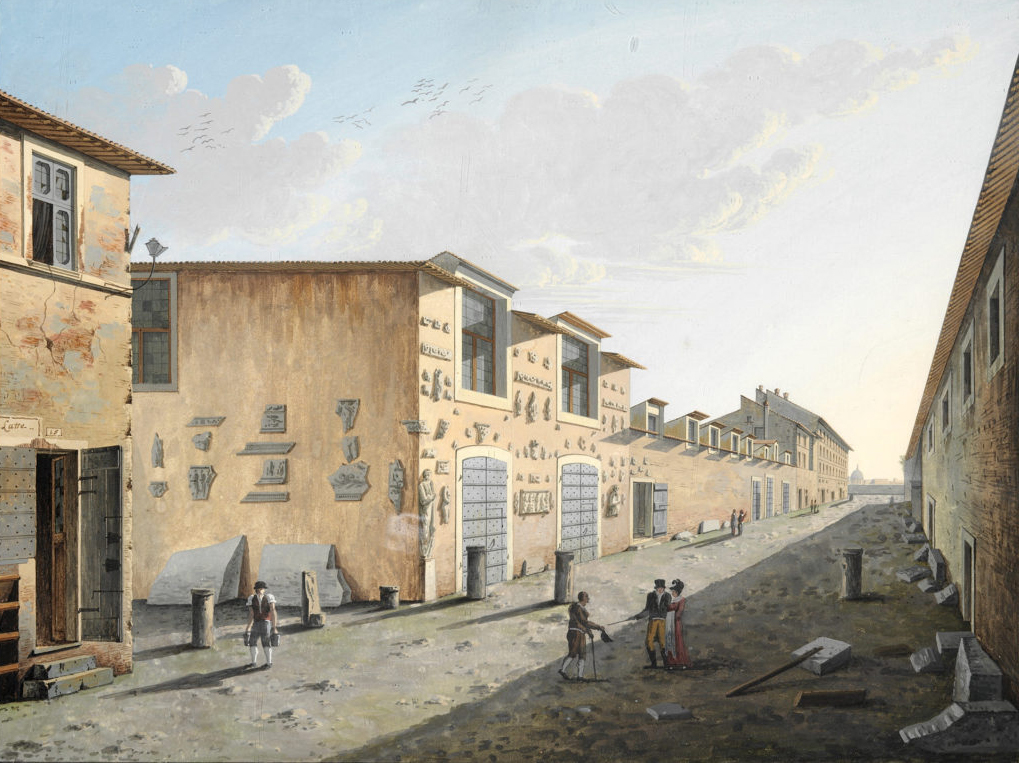 In 1781 Canova decided to settle permanently in Rome, where he opened his workshop. He received many important commissions, including the sculptural group Theseus and the Minotaur (1781-1783) and Psyche (1789-1792). Critics acclaimed him as the greatest modern sculptor and his fame grew in Italy and abroad, allowing him to obtain commissions from important patrons, such as pontiffs and European sovereigns.
Between 1795 and 1796 the Artist was hugely prolific: he created a series of sculptures, such as Hebe (first version in 1796), Adonis and Venus (1793-1795), Hercules and Lichas (1795-1815), Creugas and Damoxenos (1800) and his most famous masterpiece, Cupid and Psyche (1787-1793). In 1802 Pope Pius VII appointed him Inspector General of Antiquities and the Fine Arts, position previously held also by Raffello. In this post, Canova strove energetically to prevent major works of art from leaving Italy. 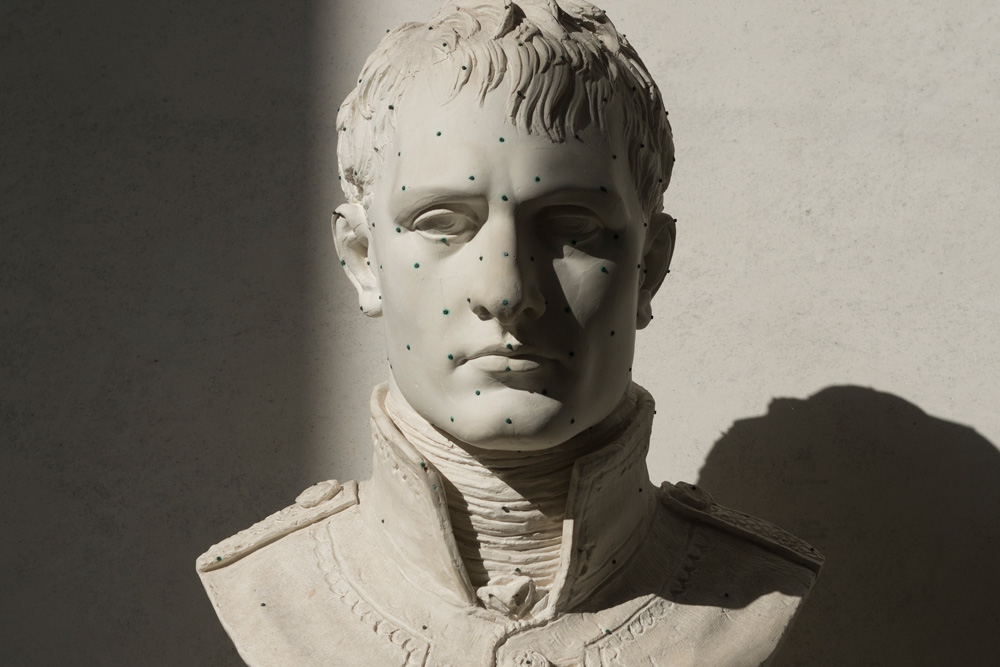 Antonio Canova’s fame reached Napoleon (1769-1821), who invited the Artist to Paris in 1802. The First Consul of France commissioned him a portrait, but Canova didn’t accept the commission immediately. In fact, he didn’t want to portray the man who destroyed his native land, the Republic of Venice. Nevertheless, he then modelled a bust of the First Consul.
Canova portrayed almost all members of Bonaparte family. In 1804 he accepted a commission to carve a reclining portrait of Napoleon’s sister Paolina Borghese as Venus Victrix (Rome, Galleria Borghese).
In 1815, after Napoleon’s defeat, the Artist went back to Paris to bring back all the works that were stolen during Napoleonic campaigns. His diplomacy furthered the return of many Italian masterpieces.

In 1815 Antonio Canova went to London to observe and study the Parthenon Marbles, exhibited at Burlington House. Only after the Sculptor’s judgment, the English government considered the marbles original and bought them. They were then exhibited at the British Museum in London.
In the English capital the Artist was also invited to a banquet organized in his honor by the Royal Academy and was portrayed by the painter Thomas Lawrence.
King George IV was among his important English patrons and commissioned him two sculptures: first, Venus and Mars (1816), allegory of war and peace, exhibited in February 1822 at Buckingham Palace, and second, a copy of Three Graces (1812-1817). 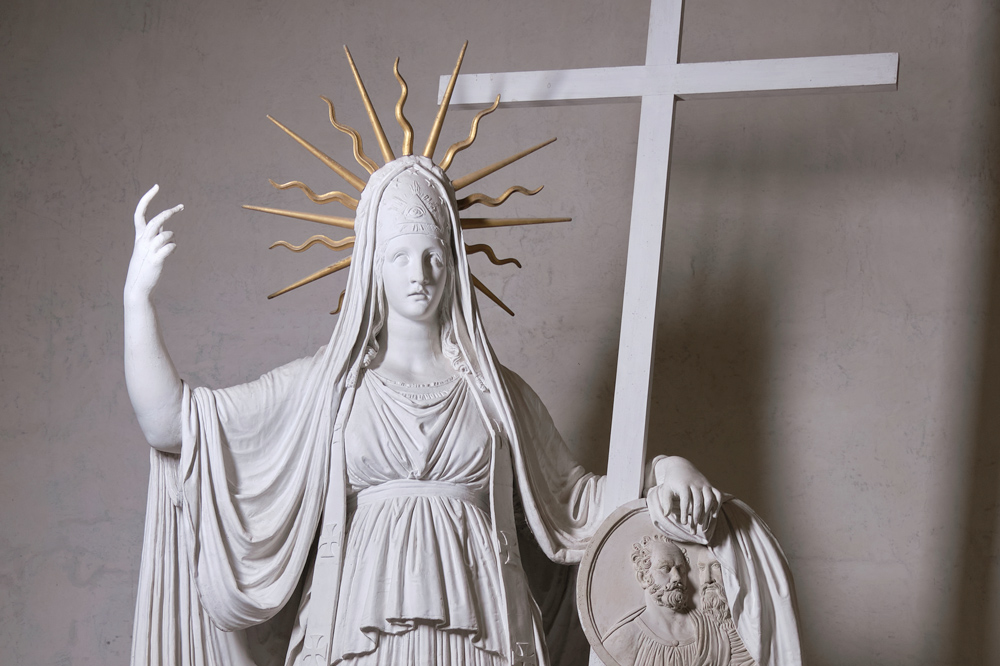 Antonio Canova decided to finance the construction of the new parish church for his native village. The people of Possagno provided necessary materials, such as lime, stones and sand, and were enthusiast to participate in this project, working also at night and on public holidays.
Since Canova lived in Rome and couldn’t participate in the construction of the Tempio, he received weekly letters to stay updated on the work.
Unfortunately, the Sculptor never saw the work completed as he died on 13th October 1822 but his half-brother Giambattista Sartori, named Canova’s universal heir, completed the construction. Giambattista Sartori transported also the plasters, clay models, and marbles preserved in the Sculptor’s Rome studio to Possagno in 1826, where he arranged for their display in the Gipsoteca next to Canova’s house, constructed between 1831 and 1836.

Relation with his native town, Possagno

Although Antonio Canova lived in Possagno just for a few years, he always maintained a deep bond with his native village. In fact, in response to an appeal in 1818 from the people of Possagno to help finance repairs to the village church, the Artist decided to provide and decorate a new building, the Tempio, whose foundation ceremonies he attended the following year. Canova also endowed charities for his native town: for example, he established dowries with the money gained from the sale of the Three Graces (1812-1817), which allowed many young women with economic difficulties to get married.

View on the museum complex and on the town of Possagno

Stay up-to-date with museum news, events and activities. Subscribe to our newsletter!